Today we step back into a little bit of normal as Rob returns to hockey after a two week hiatus to let his finger recover from its nasty introduction to a table saw. He’s due to get stitches out today; the plastic surgeon he saw said the ones put in temporarily were “fine,” so we’ll see. Rob felt he was treated rather dismissively because of the nature of his injury. It may have been Rob’s own sheepishness that was the filter through which he perceived that he was being judged, but however the doctor felt, let’s hope Rob’s recovery continues smoothly.

Meantime, I was feeling sheepish myself on Friday. The day after our first Zoom dog training class (which went amazingly), we had several setbacks in our puppy’s progress. More messes than successes, if you get what I mean. While she was relentlessly bugging Colin, jumping up at him and disturbing him while he tried to do one of his favourite things at our place: play games and do yoga with Wii Fit, he was getting upset, and I was even more so, as I began to worry that he might not want to spend time with us anymore.

What had I done? Had I upset a perfectly wonderful apple cart by adding a rambunctious little dog to our lives? How could I have forgotten how much work a puppy is?

I knew that Rob and I were doing all we could to make sure Rosie is the best dog (and we the most informed pet parents) possible. But had I made a huge mistake? I went to bed Friday feeling pretty despondent, even though a hiccuping little black and white furball was curled up next to my pillow.

On Saturday morning, after two successes in the outdoor toiletry department, Rosie and I were off to puppy socialization class. There, in one of two pens set up at a farm, she and three other pups ran and played, crouched and sniffed. While she was the only puppy who insisted on jumping up on the trainer to get her attention (which the trainer wisely ignored, telling us all she was doing so), Rosie also showed a lot of confidence in letting the other pups corner her and turning up her tummy to them.

I asked if that was submission and was told, no, that was confidence. She’s got a backbone without having to show her teeth (or, evidently, her back) and that makes me happy. We’ve got a little girl with character who would go right after the pups that had cornered her, to lure them into more play just as soon as they turned their backs.

That instructive half-hour in the 7 C sunshine was enough to raise my spirits and wear out Rosie, who slept most of the day. In a room with mats, a crate and blankets, where did she choose to nap? On a wood crescent, under an end table.

Yesterday morning she was there again. Okay, Rosie…. 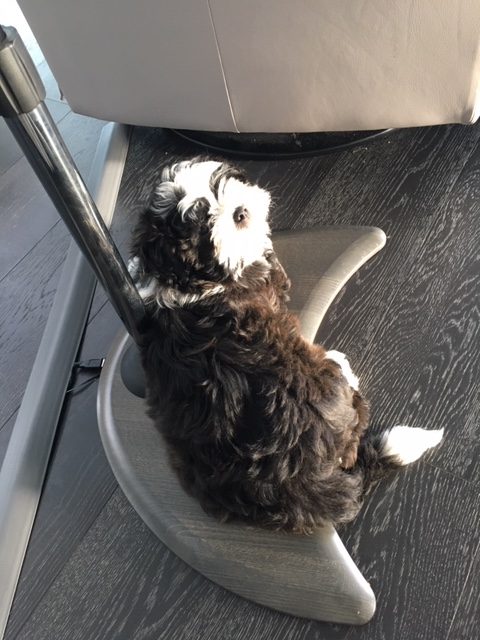 As for Colin (who thankfully sleeps in a bed and not under a table), he was comfortable enough in her state of lessened exuberance that he wanted to stay another night. I needn’t have worried, it seems. But it doesn’t mean we will stop learning how to make their time together as easy for them both as possible.

We’ve put off Rosie’s meeting of our granddaughter Janey until we get our crate training established so that Rosie can have time outs without losing her mind. Jane is just starting to take lots of fast steps and the last thing we want is for Rosie to think it’s a good ol’ game of tag. We’re all learning here together. And while we can teach Colin to “be a tree,” Janey is just being a baby. So it’s a dance.

Please don’t get me wrong. I’m grateful to have Rosie in our home and in our family, even if it means there isn’t a rug to be found, the dusting and cleaning have taken a vacation (while the vacuum is going overtime), and we’re watching and following her around as though she might lay a golden egg every waking hour.

I’m luckiest of all that there are people around who understand what this ride entails: Rob for his patience with Rosie and me, Brooke and Phil for happily taking a rain check on a family dinner invitation and Colin for believing me when I tell him he will always, always come first. I don’t know that they’ll become close friends after a rocky start, but we can hope. It’s hard to imagine her sleeping next to him one night but you just never know, do you?

Have a gentle Monday as we embark on the second half of November.