Well, since there’s absolutely nothing of importance going on in the news today, I thought I’d tell you about the good, the bad and the ugly of the last three days in our lives. (And if you didn’t get that the preceding line was sarcasm, I’d urge you to get to know me a bit better.)

Hallowe’en. If you visit my Facebook page, erindawndavis on Instagram or @erindavis on Twitter, you know Rob and I donned our banana costumes and accompanied a sweet little firefighter, his sister and parents through their new neighbourhood. 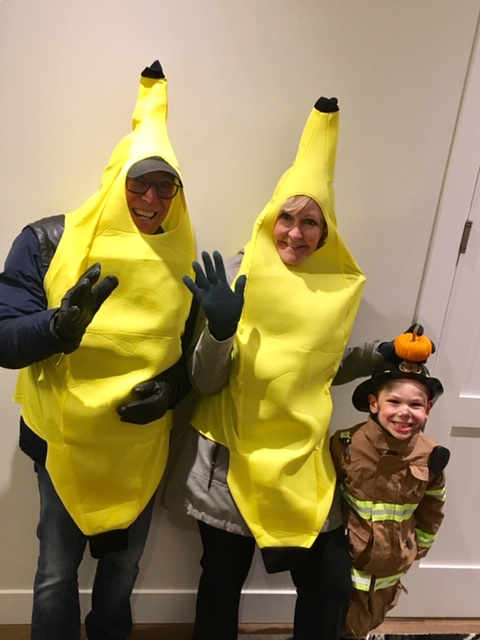 Little sis Jane was an avocado and an angel in her stroller, and under clear blue-moonlit skies with no wind and about 4C, we had a perfect night. 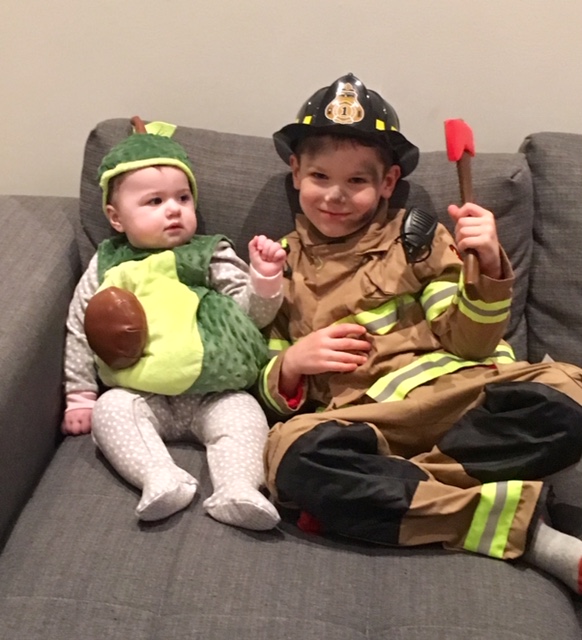 My trip to Kelowna to pick up our puppy – whose name we’ll share later in the week – was a complete success. She whimpered in the car on the way to the airport, where this photo was taken, but she was an absolute doll for the entire ordeal. 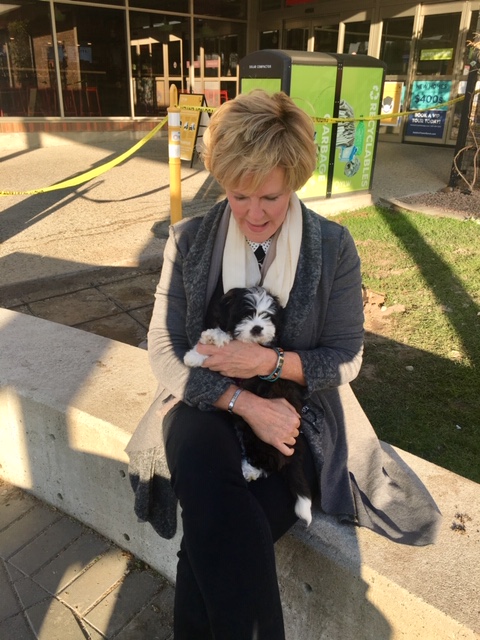 I had an all-too-brief but lovely visit with my dad and sisters Heather and Leslie over breakfast. Dad’s well and although it wasn’t the same laughter- and tear-filled kind of visit we had in June, it was a gift just to spend some time with them and get caught up. Dad’s still feeling the sting of confinement and longing just a bit for the freedom of his car, while also recognizing that both are for the greater good. Okay, and now for…

Did I use the word “ordeal” above? Yes. Yes, I did. The pup and I checked in at Kelowna International Airport at 4 pm for a 5:40 pm flight. We found a quiet corner where I could let her out of her travel bag and I laid out a blanket and a pee pad. She slept almost the entire wait. So that sounds like it should be good, too, yes? Except that the wait was extended again and again.

Apparently (and this is a rumour) a small plane missed the runway and there was debris all over. I heard from a fellow traveller that the pilot was uninjured so the worst that happened was a cleanup and delays. Many fliers on bigger airlines missed connections; all the baby and I had to do was sit and bide our time, which was about two hours extra.

We finally took off around 7:30. Some of that time waiting was spent with me walking through an increasingly crowded departure lounge, pee pad under one arm, purse over the other and holding the pup in the crook of my arm. Every time I put down the pad – whether in a closed off area or the washroom – she just lay down on it. But she held her pees until we got home. All good…also until we got home.

Rob took advantage of a rare day without me to tidy the garage. Top of the list: moving firewood and cutting kindling to make more room to manouevre around the parked cars.

I won’t go into too many details (you may just be waking up) but here goes:

– He ran his gloved left hand into the uncovered spinning blade of a table saw.

– He drove himself to the hospital (because…Rob).

– He received the good news that he wasn’t going to lose his ring finger.

– They didn’t have to cut the ring off to save the finger.

– He’s expected to be okay but his thrice-weekly hockey is on hold and I don’t know that he’ll be playing guitar for family at Christmas.

Yesterday he had a consult with a plastic surgeon to talk about damage to a ligament in the finger. They decided to do nothing for now and will reassess in a couple of weeks. If all goes well, he won’t be asking for 10% off a manicure (as if he ever gets one) and, except for kicking his own backside for his carelessness in reaching across the raised, whirling blade to grab an errant branch, he’s doing all right. My poor Robbie.

Here he is meeting the pup when my friends brought me home from the airport Sunday night while he recovered at home. That big white thing was a splint put on by the emergency room staff. 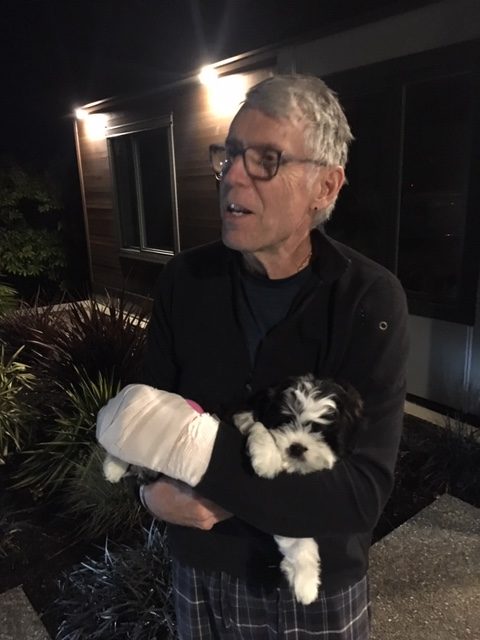 We’re all doing fine today; I’ve been sleeping with the pup in a separate room so only one of us is kept awake by the whimpers (hers, not Rob’s).

I’ll be back with you here Thursday, or tomorrow if I am losing my mind over tonight’s results. I’m scared, excited, more scared and trying to focus on the “wisdom to know the difference” part of the Serenity Prayer, about changing what we can.

Stay safe, stay sane and stay hopeful. Also, “stay away from table saws if you don’t keep the safety on.” That last part is a public service announcement from Rob.