Just a thought… The secret of change is to focus all of your energy not on fighting the old, but on building the new. [Dan Millman]

HELLO!!!! So, have we settled on just what we are calling this year? 20-20? Two-thousand-and-twenty? Two-thousand-twenty? I hope that there’s some kind of consensus; I’m tired of recording two or three different versions of a year when I do auditions. “In two-thousand-and-ten…in twenty-ten…” and on and on. An informal Twitter poll I posted showed nearly 100% of us are saying 20-20. So there we go!

OK – confession: I wish I hadn’t put off writing a new journal until the 6th; I figured many people wouldn’t be back in their routine until today if the school board schedules (by which we used to time our radio vacations) are any indication. I have a lot to tell you.

Some of you know from FB and other social platforms that Mourning Has Broken (which comes out next month in soft cover) ended 2019 on some Top Ten lists: #9 on the Toronto Star for Non-Fiction Canadian, #10 in the Globe and Mail; #20 for international authors, non-fiction in The Star.

Rob and I had a joyful morning (on my late, feisty grandmother’s 111th birthday Dec. 28) as the lists were sent our way by readers – thank you all. And the news couldn’t have come at a better time. 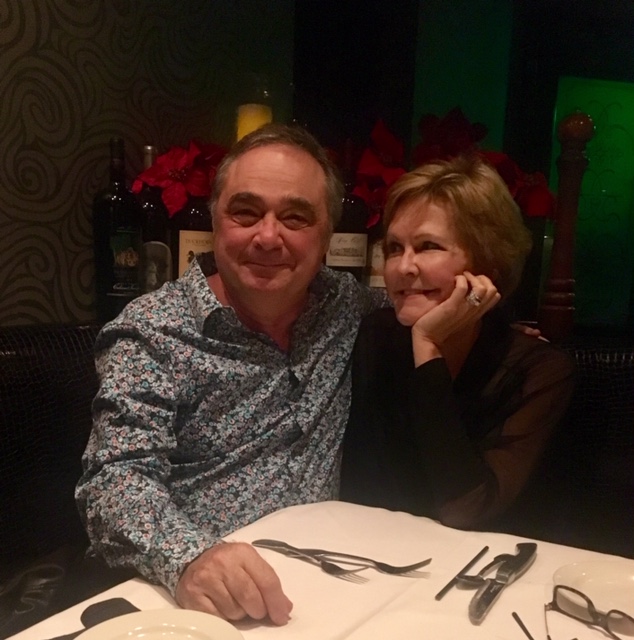 My dear friend and radio partner Mike Cooper left the day before the lists came out. The silence in the house was, as the saying goes, deafening. Molly kept trotting around, checking to see where the man with the big voice was. The heaviness of that quiet, the lonely realization that it was back to our “normal” after several boisterous days together, hit hard.

We enjoyed a road trip, a Christmas turkey dinner, a night out together (seen above) and enough moments to hold onto for the months between now and our next visit, likely in May when I return to Toronto for two events.

On December 30th I marked my 6 month “birthday” as they call it in 12-step groups. Yes, I made it to 10 years the first time around, but every milestone is a big one. So yay. More cranberry and soda, please. I posted this on Twitter: 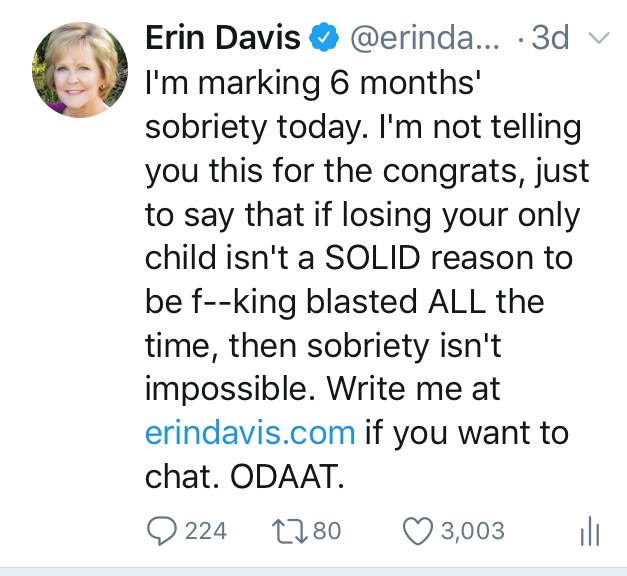 There were literally hundreds of messages and a few dozen extremely personal and touching emails from people wanting to know more. Of course, I answered as best I could, deeply honoured to have been taken into people’s confidence and hearts.

There were two people on Twitter who objected to me using an F-word, even with dashes, to express myself. (One said I was obviously not a nice person. Such a gift he has, being able to sum up another person so succinctly through just one tweet!) I responded this way: 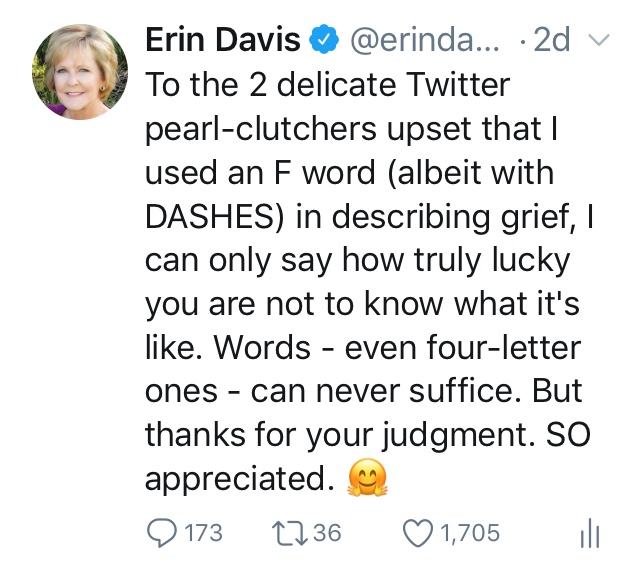 And the tweets that followed were nothing short of hilarious, almost all dipping into their colourful vocabularies as well. Ah, Twitter.

Out of those two tweets came an interview with the National Post. An intern named Merna got in touch on NYE day and asked for a chat. Of course, I obliged, and the result is here.

I did reach out later and offer Merna one correction on the initial print article: I was off work, not for a year, but a month. However, there’s one word that made it into the story that I wish I could change: “advice.” I am in no way giving advice to people who reach out to me; just support. I’m not in a position to offer anything except perspective and what is working for me.

My biggest message is to talk to someone – anyone, even if it’s online – if you think that your drinking is not something you can control any more. (Is that advice?) I cringe to think that my fellow 12-steppers and the folks who have guided me to where I am today think that I, of all people, am giving advice. So please know that’s not the case.

I haven’t gotten a “how dare you?” email yet (and have resisted reading comments on the Post website, as that’s nothing but a cesspool, if past experience with that section of the paper has taught me anything) but with that one word, advice, I would not be surprised at all to get one. I guess I’ve been lucky.

But honestly, there are a great many more things to be concerned about today than one little word that may be misconstrued: the devastation in Australia, the insanity coming out from a grievous gargoyle on a golf cart in Florida. But I’ll keep trying to remember to accept the things I cannot change, and to try to make a difference in the ways that I can – however small.

Have a gentle “first day back” and I’ll be with you on the usual social media platforms, plus here with you Thursday. And I wish all of us a peaceful 2020.