Just a thought… Trust your Inner-Creator and let go of your inner-critic. [J.R. Incer, author of Mastering Success]

I have a guest today in the form of the voices in my head. I thought you might be able to relate, if you have those nagging little thoughts that tell you you’re not worthy, you don’t deserve this (the good things, that is; the bad things you almost always deserve, according to that destructive little sprite) and that you shouldn’t be announcing something big because it sounds as if you’re boasting.

I’ll take you back to give you an example of when that voice was loud and funny. Last month I was delivering an online speech for a U of T group. While it was happening, I could see how many people were online taking part and watching. Okay, cool. I don’t measure my success in numbers anymore…or so I thought.

Because every time I saw “so-and-so has left the group” I’d think, Aw jeez, what did I say wrong? How did I offend them? Was it boring? when, of course, it wasn’t about me. For all I knew, they had an appointment to get to and caught as much as they could. Right?

But it’s always that voice. The one that told me to lay off the mentions here and in my social media of the Hall of Fame induction last month. The one that had me suggesting to my pal Nancy that she not notify the local media, when in reality, the piece that CHEK News in Victoria did was really a highlight – being recognized in my own community. I have been contacted by people in grief and service groups here in the Victoria area who are interested in my message, so that’s a huge positive and really what this is all about: hope.

Then there’s the actual award and the “worthiness” issues that come up. I concocted a list in my head of the things I figured people would be thinking or saying about me getting the acknowledgment, not one of which actually came to my inbox or showed up online. A long public life has me kind of braced for this all of the time. (See: Reasons Erin Drank #14.)

Public or not, I know I’m not alone. I got an email from a brilliant woman just this weekend who specifically mentioned those gremlins as she tackles her next great project. Fortunately, there’s hope, as we are both fans of this woman: 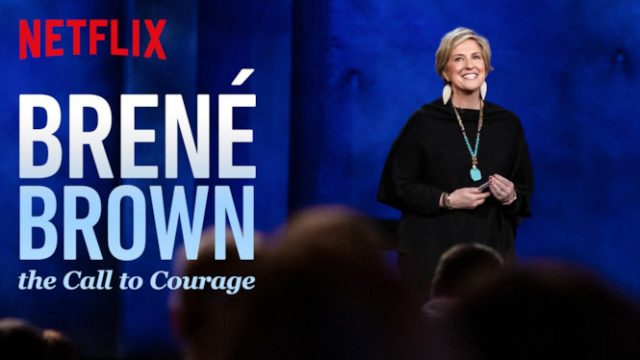 One of the few (and best) researchers and speakers on the subject of shame and vulnerability is Brené Brown. You’ve heard me mention her before and I’ll do it again: her Netflix special, part stand-up comedy and ALL brilliance, The Call to Courage, reminds us that it’s the person who is in the ring, getting bloody and dirty and failing, who is doing the work, not the one in the stands yelling or taunting or, yes, posting. The critic doesn’t win.

So what about when that critic isn’t in the stands but in your head? One of Brené’s books (and each of them is outstanding in its way; I recommend hard copies instead of downloads so you can mark, dog ear and read over and over) has the perfect analogy. Forgive me if I’ve brought this up before, but maybe you need reminding of it as much as I do.

Say you were driving down to work and you had a passenger who was sitting there sipping her coffee and saying things like, “Oh my gosh, that outfit makes you look fat. You’ve got to get more sleep, you look about ten years older than you are. Is that the best you can do? Because what you’re saying isn’t very funny and, frankly, you’re a lousy driver.” You know, stuff like that.

So what would you do? Quite likely, you’d pull over, tell that cow in the right seat to get out and find another ride. You would tell her she had no right to talk to you like that and if she didn’t respect or care for you enough to treat you better, then she could just…well…YOU fill in the blanks. But “take a walk” would be one way of putting it.

Ms Brown’s advice is to let that passenger out of your head. I am telling you this because I let her ride for free far too often. Not only is she annoying as hell, but honestly, all of that nasty heaviness is really hurting my speed and how much distance I can get to the litre.