Just a thought… We operate under a jury system in this country, and as much as we complain about it, we have to admit that we know of no better system except possibly flipping a coin. [Dave Barry]

Well, I got this in the mail the other day. Yep, the long arm of the law has come for me – but in a good way. Apparently I’m to get up and go to the courthouse a week this Saturday at 9 am and show up for jury duty. 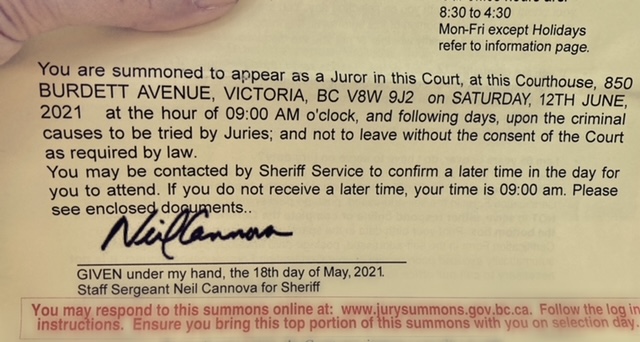 And you know, although lots of people have good reasons for not wanting to do it, I feel like if I was tried for something (not that I have anything planned or anything, let me say that for the record) I would want ME on a jury. So call this paying it forward. It’s also the price we owe for living in a law-abiding society. So I’ll be dropped off at the courthouse on Saturday and we’ll see what happens.

Some people never get asked, while this is about my fourth time getting called. It’s never happened here in BC but did three times in Ontario. Twice, I was about to move and leave the area so I couldn’t attend, but the third time I was doing the morning show in Toronto and I did the whole “show up and wait” thing.

Boy, was I was nervous! Like, defendant nervous. First of all, I was going to try to tell the judge that my hours just wouldn’t allow it – I mean, does anyone want a juror who got up at 3 am nodding off during testimony? But as I listened to the judge shoot down excuse after excuse from potential and begrudging jurors ahead of me, I realized that I was going to get a lambasting from this Judge Judy and my little fatigue factor excuse was flimsy; I was not going to sway her, nor did I choose to be humiliated in the process.

So I got as far as swearing in, then being interviewed by the defense and Crown representatives. There was a cop on trial, as I recall, and I think that my deference to authority with “yes sir” and “no sir” responses to their questions scared off the Crown. That wasn’t my aim, but that was the result. They basically said, “Thanks for coming out,” and that was it. One audition I was relieved not to get, thank you.

For some, there’s the perception that once you’re in the pool, you’re called upon regularly. Despite our sometimes hectic schedule (we’ve already given warning to our podcast partners that I might not be available for a scheduled recording session) I’m pretty much free to do this. Rob will drive me to and fro and we’ll see what happens.

Let’s just say I’m relieved that this is coming now and not when I’m doing a regular job. I do recall Mocha from the Roz and Mocha show on our sister station Kiss 925 having to juggle mornings and jury duty; then there was an idiot on another station who made jokes about the trial he was involved in. It caused the host’s suspension from his soon-to-be cancelled radio show, and nearly caused a mistrial.

The justice system has enough roadblocks and challenges – not the least of which has been rampant Covid delays – without “but, my life is busy” being one of them.

Like I said, I’d want me on a jury, so we’ll see if they do, too. And if I’m really lucky, there will be frisking. Kidding. I won’t frisk anybody.

Have a great weekend and I’ll be back with you here on Monday.