Just a thought… When I was a boy and I would see scary things in the news, my mother would say to me, “Look for the helpers. You will always find people who are helping.” [Fred Rogers]

I had put my rant pants in the laundry as we get set to close up the house and come back to BC. But, if you’ll forgive me, I dug them out again, and all thanks to one tweet. One tweet. And if you’d like to rant, too, my Facebook page is wide open.

I already had one person say everyone’s going “overboard.” If she meant crazy, shopping for the apocalypse and adding bodies to crowds when we’re not supposed to gather together, she’s right. But if she’s talking about taking precautions so that the vulnerable among us don’t catch a virus that is ten times more deadly than the flu to which it’s so often compared, she’s wrong. Dead wrong.

Open a news link and read about Italy. Spain. The other European hotspots.

Yes, the virus began elsewhere, but history will be clear: the horrific handling of the situation lies solely in the lap of the man who said to the whole world, “I take no responsibility.” The person in charge, who basically said, “The Buck Stops….way over there. Next question!” The one spreading lies about how the Obama administration handled H1N1 because everything is Obama’s fault. The one who only worried about how this pandemic was going to affect his chances at re-election and did NOTHING.

I almost deleted and re-wrote today’s journal because I thought no one needs more angst. It’s like I felt in the early days of losing Lauren: I awaken feeling just fine and then the memories of what we’re going through come and sit on my chest like a baby grand piano and I remember. This is actually happening.

As – one by one – major sports, music and family events were cancelled, I turned my thoughts to children late last week when theme parks closed down and slammed shut the dreams they’d been making for months. Then I found out just how even the most innocent statement of compassion can be a jumping-on point. 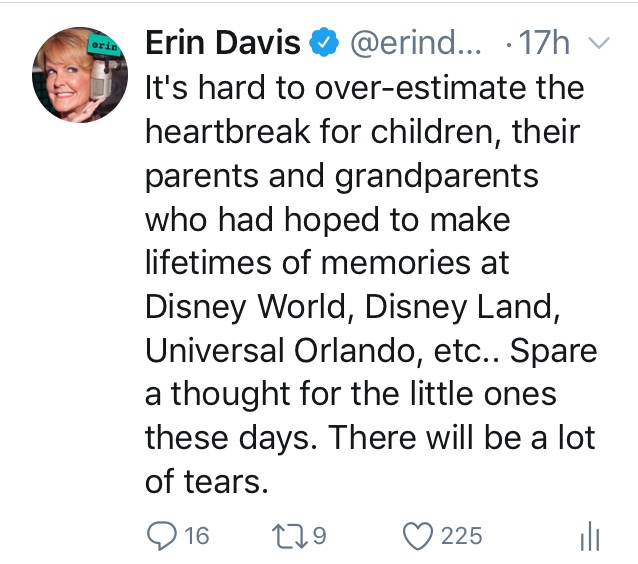 I thought of the families in those TV commercials, whose kids lost their minds when they opened their Christmas gifts to find they were going to the Happiest Place on Earth in the spring. I remembered much more modest outings with my own parents – they were few – when we counted the days before heading off to a little adventure.

I imagined, as a grandparent myself, having the fantasies of a few days of unfettered fun with Colin and Jane at a special place – a water park hotel, a magical theme park, a tropical resort with a crazy fun kids’ program – and felt my own broken heart. It’s called empathy. You probably know it, but not everyone does.

Because then, to my immense surprise, came the pile on. One came from a media person (who later tweeted that his response was “his bad” so I won’t show you his tweet), and the other from a few random tweeters who saw his and dove in.

Basically, their responses suggested we imagine, instead, trying to tell those kids their grandpa had died because of the virus and the trip they took. Others said there were much bigger concerns; Disney trips can be rebooked and it’s not like the park won’t reopen.

Did someone call Captain Obvious? I’m pretty sure I haven’t booked anything recently through him….

SHAME ON ME! I took one aspect of the coronavirus and told a small tale of what I pictured was happening in families at that moment. Children too young to understand what even a US president didn’t seem able or willing to comprehend – the deadliness of a pandemic and its consequences, big and small – who would be left without the March Break of their little dreams. That includes camps, parks, skates and other events. All totally inconsequential things to us big, mature, circumspect adults, but almost impossible to explain to a child.

I was reminded, not only of what a cesspool Twitter can be, but of how the “whatabout-isms” never, ever end. Justin Trudeau’s wife is diagnosed with COVID-19? Let’s pile on and tell her to give him a big hug so he’s sure to catch it. Let’s say we hope he dies. Let’s use social media to show who we really are – without, of course, actually using a real name or photo. Let’s just be the garbage people that a pandemic calls for. Roll up! 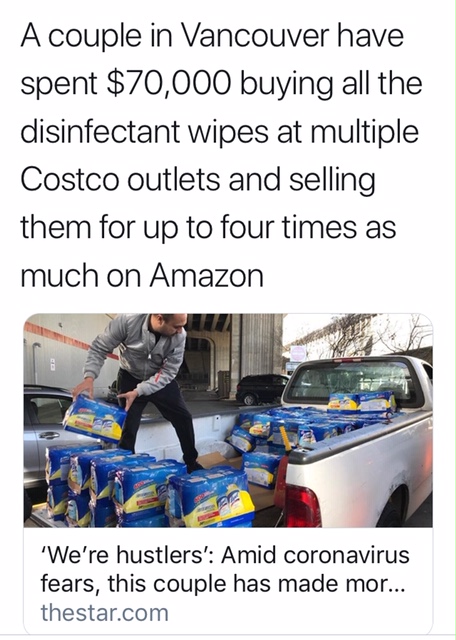 The ones loading up pick-up trucks with hand sanitizer to sell at exorbitant rates (and have now been prohibited by Amazon from selling them). The store managers who jack up the price of toilet paper or hand sani just to make a profit on people’s fears. The people peddling panic.

Side bar: just where did the story about needing toilet paper so desperately emanate from, you ask? My friend @lisambrandt posted that @YahooNews claims the TP panic began with a story about a shortage of material to make masks overseas. She says, “Some twits on social media decided incorrectly that it’s the same material needed for TP. It is not.” Ah. There it is.

We are, most of us, sentient beings. We are capable of caring for more than one group of people, one issue at a time. I can feel sad about children’s disappointment, and desperately sorry about people losing their grandparents because of this illness.

I can feel compassion for our prime minister and loathing for another “world leader” at the same time.

You can worry about how you’re going to go to work while your children’s daycare is shut down, while contemplating the horrific life-and-death decisions being made daily by doctors in Italy.

We can do all of these things. We can have all of these thoughts simultaneously. And we don’t need to be called out by the higher thinkers with no names and 7 digits following their twitter handle, who feel we’re monsters for not encompassing every single person, every cause, every disaster in each individual tweet.

But let’s be positive. We’re going into self-isolation when we get home this Thursday for two weeks. Rob’s going to miss playing hockey BUT WE KNOW HE’S NOT IN ICU. (His BC hockey’s been cancelled anyway, but you get the point.)

The NHL and NBA seasons are postponed BUT MOST PEOPLE CAN’T AFFORD THEIR RENT, NEVER MIND PRO SPORTS TICKETS.

Restaurants are asking people to buy gift certificates to keep them afloat and pay their employees during the pandemic BUT WHO HAS MONEY TO EAT OUT WHEN WE’RE PAYING FOR DAYCARE?

I won’t see my aunt and uncle in the days after our return BUT WE’RE NOT VISITING THEM IN A CEMETERY.

You see how stupid that all sounds? Perspective, please.

Me? I’m going to chill, continue to lie low here trying to distance myself from social media just a bit until we fly out Thursday and wonder on occasion why I don’t self-isolate from it (despite how much life it gives me to get ranty now and then).

I can’t quit you. I may even start writing more. Thanks for being here and thanks for being sane, like Steven Braverman, aka @Brittlestar, a fun follow on Twitter. 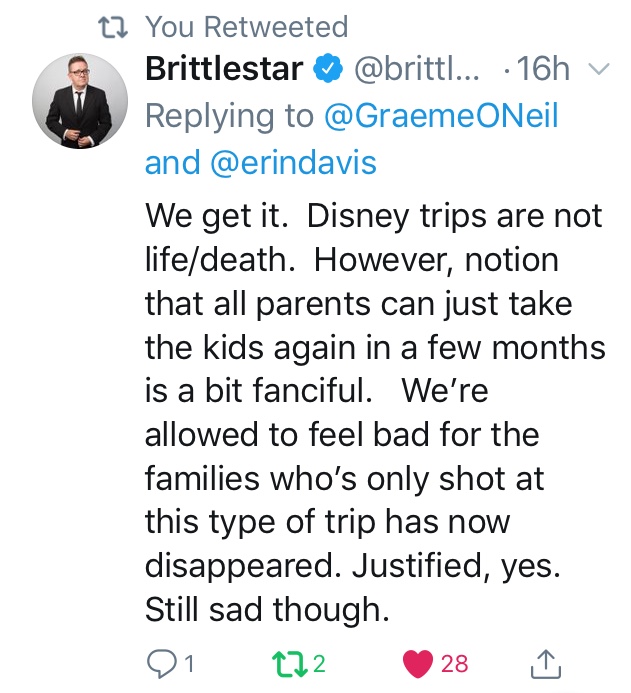 I’ll be back tomorrow with some happier news – a bit of fun you’ll want to listen to, to take your mind off the headlines, the headaches and head-scratching posts on social media.

Be well. Self-distance. Be kind. Call a neighbour or someone who’s not going out, and may need milk or just a kind voice. We can all be “the helpers” that Mister Rogers advised us to seek.

We Can Do This.