Just a thought… Nursing is not for everyone. It takes a very strong, intelligent and compassionate person to take on the ills of the world with passion and purpose and work to maintain the health and well-being of the planet. No wonder we’re exhausted at the end of the day! [Donna Wilk Cardillo]

Here we are, smack-dab in the middle of Nurses’ Week in Canada, and one day after International Nurses’ Day. Sorry I missed yesterday as an opportunity to tip my cap (which I remember mom wearing, that starched, velvet-banded nurse’s cap) to those women and men who are working tirelessly – I won’t say fearlessly – for the health of us all these days. And a huge hug to their families for the sacrifices and the worry they endure every single day.

I can only begin to imagine the fury and tears that were felt by healthcare workers locked behind the windows of a Vancouver hospital Monday as a group of COVIDiots stood outside in the ambulance bay, loudly protesting closures and isolation due to this virus that, so far, has claimed over 5,000 lives in Canada and some 290,000 worldwide.

The misinformation that is rampant among the foil-and-MAGA-hatted morons on our side of the border, as well as theirs, is just unbelievable. They swallow in one gulp absurd theories just because someone posted a video. They call Bill Gates a monster because he’s trying to help humanity. Shame on a billionaire for doing that! Vaccines? He’s Hitler!

This man has done more to help the planet through his work to eradicate polio than anyone I can think of in this century. Yet those people, who, in earlier days, would be locked inside rooms with padded walls, are intent on convincing us all that he’s evil. We’re all being injected with tracking devices or worse. I mean…I can’t even fathom what kind of a mind invents this insanity, never mind follows, retweets and shares it.

I’m fed up with so much these days – and I know you probably are, too – including the uncertainty of when to get out, what to do, why people aren’t wearing masks and the myriad questions that are swirling through our heads every single day. But I have no time and zero tolerance for people who are actively putting others at risk.

Children have been relatively unscathed by COVID-19, but now there are bizarre manifestations of the disease in younger people (and this isn’t from some website that makes the National Enquirer look like the New England Journal of Medicine).

There’s so much about this virus that we just don’t know and yet people are screaming about getting their hair cut. Damn it, I’m at the point where I want to shave my head, but I’m not going to picket and protest and show the world just how little I care about the well-being of other people.

I’m sorry, this was supposed to be about nurses. I guess, in a way, it is: these men and women who have upended their lives – and given them, in some cases – so that we can be helped and protected from a virus for which there is no vaccine, no timeline and no certainty.

My own mom lived with hepatitis after getting a needle stick during her career as an RN; she never talked about it. The only time I ever heard her say anything that even sounded like a complaint was at the end of a long shift at a nursing home, when her back ached from lifting patients. 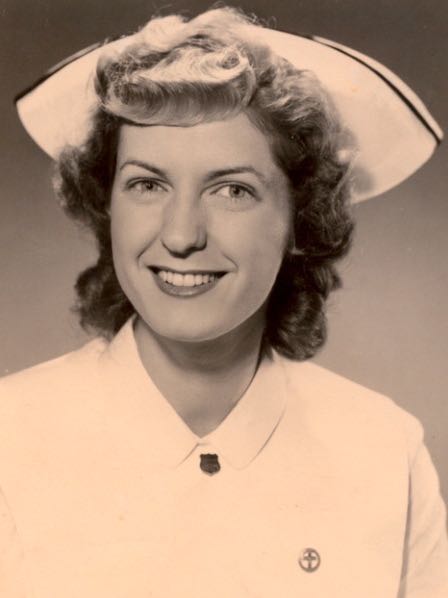 That was who she was: keep calm and carry on and just do your job.

But I know if she was here today she, like me, would be wearing a mask but no filters when it comes those who call us “fearful grannies” as they take up the anonymity-cloaked weapons of their crumb-covered keyboards or greasy smart (pfffft – yeah, smart) phones from deep in the safety of mom’s basement.

Those intrepid ferrets who are out there with their big, scary weapons strapped to their concave chests, who are in reality white terrorists led in spirit by a mealy-mouthed cotton candy-haired liar who is calling on Americans to be “warriors” when he himself had five deferments from military service due to the bone spurs which – you can look it up – seemed to hit an alarming number of privileged young men in the 1960s.

In case you hadn’t guessed, I’m fed up. And I know with every fibre of my being that my mother would be, too.

We could do all nurses a big favour and follow what the grownups in charge tell us to do. Our feelings and some idiot politicians’ “instincts” don’t supersede or overpower a deadly virus, no matter how worried they are about their “numbers.”

There will be a second round of deadly infections (in my opinion) and it appears that everyone who is demanding that other people get back to work – whether it’s to cram into deadly meat-processing plants or return to a factory that makes luxury cars in California – should be denied the compassionate and dedicated care of the nurses we salute this week.

They won’t be; that’s not who nurses are.