Just a thought… There are memories that time does not erase. Forever does not make loss forgettable, only bearable. [Cassandra Clare]

A young woman named Jennifer Casey died yesterday: a Halifax native who was part of a team of nine Canadian Forces Snowbirds, bringing hope and smiles to a nation in need of a reason to look up – literally.

A year not even halfway through has been rife with tragedy. From the crash of a plane in Tehran in January that claimed the lives of dozens of Canadians and others who had ties to our country, to a horrific, violent swath cut by a madman who took 22 lives in Nova Scotia; it’s been hard for us all to catch our collective breath.

Even taking that much-needed breath has been challenging: a mysterious and deadly virus hit the world and paralyzed our own country, causing some 5800 deaths here in Canada and infecting tens of thousands of others.

Just last month, our Canadian Armed Forces suffered the loss of six of their members, when a helicopter crashed off the coast of Greece. We paid our respects at a distance; people were asked not to line the Highway of Heroes from Trenton to Toronto – a tradition to honour our country’s fallen servicemen and women – so as not to gather during a pandemic.

And then, yesterday’s tragedy. The CF Snowbirds lost a team member. And so much more.

Taking off from Kamloops in BC’s beautiful but cloud-laden interior yesterday, Jenn and the rest of the team were coming over to Vancouver Island’s YQQ – CFB Comox – to reposition. Like countless Canadians, many of whose feeds I watched with glee to read of the Snowbirds’ passing over the GTA on Mother’s Day, Rob and I were excited at the prospect of watching our red and white team perhaps mark Victoria Day weekend near Victoria!

I had hoped that our view of the city’s airport would afford us some good shots to share with you as we, too, were uplifted and thrilled at the thought of watching these small Tutor jets as they roared over our island. And then the news.

We held our breath, waiting to hear if all had indeed ejected safely; we saw video footage that clearly showed someone getting out as the jet nose-dived towards a neighbourhood in Kamloops.

Thoughts ran through my mind all day; the footage I saw was all too eerily reminiscent of the Snowbird crash that was seared into my brain from childhood when I saw one go down at CFB Trenton. My dad, an Armed Forces pilot at the time, tried to turn us away as he saw what was happening: a crash that resulted in the death of Capt. Lloyd Waterer, aged 24.

We never talked about it as a family over a quiet dinner that night. The sick, sad feelings that we all shared I now realize were overshadowed by the fear that I’m sure my mom must have experienced. There, but for the Grace of God….

Yesterday, the pilot, as it turns out, did eject safely, and according to @CFSnowbirds, did not suffer life-threatening injuries. But Jennifer Casey was not as fortunate.

Although details – some true, some blurry – have come in, I know you’ll have been updated on what happened (as much as we know) by the time you read this.

The sadness of hearing of the fatal crash yesterday was compounded as we learned that Jenn was a former journalist, a one-time member of my Rogers radio family. (Jenn also worked in Belleville, where I got my start. Radio is a small world, and one that is feeling much sadness today, too, I can guarantee you.) She was one of us. 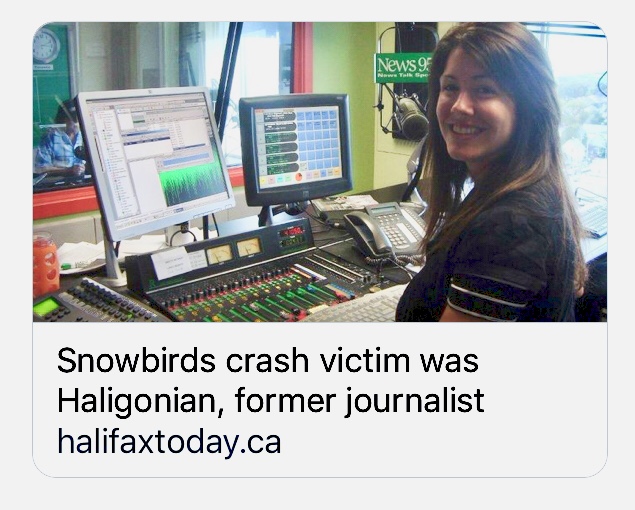 That picture reminds me of the last shot taken of our daughter before her maternity leave; she would not return to broadcasting. Jenn, who had a degree in journalism, had joined the Armed Forces in 2014 and become public affairs officer for our aerobatics team. Having had a chance to fly with the Snowbirds back in the early 90s, I’d have leapt at an opportunity to do their PR. 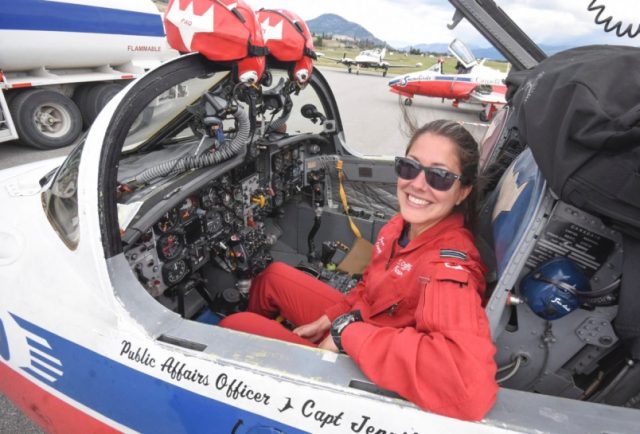 My heart aches for her family, for her colleagues in military and civilian life, and I join your hands in support for them, along with all of us who found or sought the joy that Operation Inspiration was meant to spark.

We grieve for those in Halifax and its surrounding areas who have already suffered so severely this year, and lost another of their own brave women, 23 year-old Abbigail Cowbrough, in the crash of that Canadian Forces helicopter off Greece.

When we ask how much sadness one province – one country – can take, we are coming to fear the answer these days because the tragedies keep mounting. Even a cross-country display of hope and optimism in the form of nine little jets has been hit with disaster.

202o has brought so much sadness and devastation that stopping to take it all in is a heavy task. And yet we must. Rest in Peace, Captain Jennifer Casey. You had the guts to follow your dreams and I hope you knew through your gifts you helped make Canada a happier place, at a time we needed it most.