You’ll notice today a brand new website. The company working on this (and our previous site), Graymatter Marketing Solutions out of Pickering, has collaborated closely with us to give us what we want and need, both for us and for you, as a visitor. We hope there are no hiccups, but we’ll be working together to make it the best it can be; one change will be the availability of past journals prior to 2018. If you want to refer back to something, just email me and we can locate and send it to you as needed. Rob and I hope you like what you see.

If you had trouble getting here today using a favourite link, I’m afraid your old link probably won’t work. The new site is laid out differently, so you’ll have to set up a new favourite link. I’m very sorry for any frustration you may have experienced.

We’ve added a bunch of events coming up this Fall in the ‘What’s Up’ section. I hope you’ll check it out; it promises to be a busy season!

First off, a Happy 50th Birthday today to Abbey Road, what to me is the Beatles’ finest album. Yes, there’s plenty of competition (even in our household at times) but “Golden Slumbers” (from the famous Medley on side two which closes with “The End” and the line above), will always be a song that means the world to Rob and me. So much so that we had the lovely Dan Clancy sing it at Lauren’s funeral. Yes, that special.

Smiles awake you when you rise

Sleep pretty darling, do not cry

And I will sing a lullaby….

Here’s to music that is ageless (the song’s lyrics date back to the 17th century) and a band whose creations provided the soundtrack to our family’s story – and always will.

From Abbey Road to Downton Abbey – and into space – I wanted to share with you some thoughts on a couple of movies you may be considering seeing this weekend.

I’ll jump ahead (into what’s called the not-too-distant future) to Ad Astra, an $80 million space thriller that stars Brad Pitt. What some might have expected to be a lot of “edge of your seat” was more of a slow-paced study and, like another Pitt flick, Tree of Life, it must have gone over my head. (That alone should guarantee it at least nine Oscar nominations.)

Slow paced and unengaging, its most redeeming factor is its study of the damage done by toxic masculinity – or so other, smarter reviewers have said. I just didn’t get it and I’m not ashamed to say so. We even paid extra for IMAX, which may add to the sting of not having loved the film.

As we lined up for our snacks on Friday prior to Ad Astra (which is Latin for “to the stars”) we saw people who were a lot older than Rob and I, tickets in hand, strolling towards the theatre showing Downton Abbey. I remarked to Rob that the movie, a continuation of the hit British TV series, looked to be doing brisk business during its matinee debut.

Just how brisk, we would find out when the tickets were tallied on Sunday: Downton Abbey won the weekend box office with $31 million US, compared to Ad Astra at $19.2 million, and Rambo: Last Blood (sadly, not about menopause – and I just wish I’d come up with that line) with $19 million. 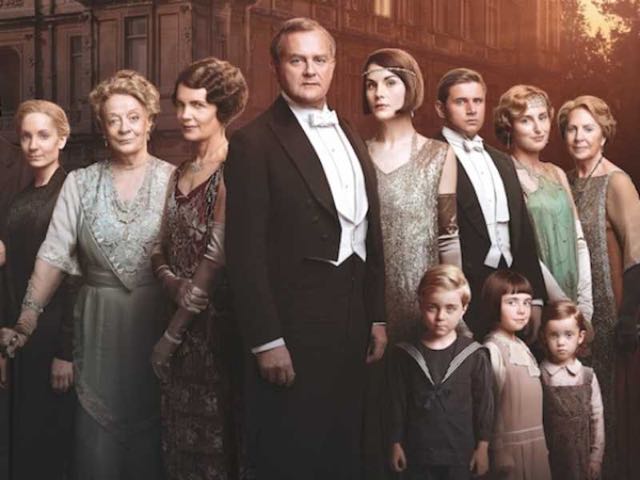 About the movie: it’s a delight. Maggie Smith steals every scene she’s in and delivers her barbs and one-liners with more dryness than a James Bond martini.

Almost the entire TV cast has reassembled for a story that, while it has plot holes you could drive a ’28 Rolls Royce Phantom through, delivered exactly what audiences wanted: more of the Crawley family and their upstairs/downstairs adventures. The King and Queen are coming for a visit! Grab your pearls and get ready to clutch!

We had a really good time. Laughs, tears, romance and suspense, plus all of the comfort of a warm cuppa on a fall day. No wonder exiting audiences gave it an A rating (compared to B- for Ad Astra).

But here’s what gave me the warmest feeling of all: a headline in The Hollywood Reporter that said “Baby Boomers Flex Their Muscles.” A movie in which no one got shot (despite a bit of a close call), there were few (if any) CGI or special effects and the closest we got to a swear word was “bloody” (for which the utterer was admonished!), killed the competition.

So, keep buying tickets to movies you want to see and tell those who decide what gets made and what doesn’t that you’re more than willing to shell out your money for a good story. Oh, and yes, there’s already talk of another Downton Abbey movie. Because, well, why not?

If a Batman villain can be resurrected 19 times (or whatever), then who’s to say we can’t keep propping up the Crawleys until Princes George and Archie come looking for girlfriends?

Have a lovely weekend.