Just a thought… Photography is the simplest thing in the world, but it is incredibly complicated to make it really work. [Martin Parr]

Yes, it’s Friday – we’re on the right day. I’m writing this on Thursday morning – a day before you read this – as I’m not sure how I’ll be feeling after the medical procedure anaesthetic that I was to be administered later in the day.

In anticipation of taking it easy, lying in bed dozing and catching up on a few of the 120 or so Forensic Files on the PVR, I’ve prepared this journal for you. Of course, I’ll have stories for you Monday. If for some bizarre reason I didn’t make it, then please someone make sure they play the theme from Curb Your Enthusiasm so Rob has a good reason to laugh.

I love to share pictures with you of our little part of the island, just a slice of this great glorious country that politician Erin O’Toole seems to feel needs to be taken back from someone…yeesh. Did I miss something? Is Canada missing?

Anyway, where was I?

At what point do I actually bite the bullet and return to using a real camera? I know that some cell phones have better lenses than others (the first time I saw a Samsung picture that a listener had taken on one of our trips I was like, “WOW. That’s amazing! Now, can you hide my thighs in that bathing suit?”).

But we’re an Apple fam and I’m afraid we’re in too deep now to get out; Rob’s and my devices communicate with each other more than we do, and it’s just super handy to have everything connected.

Note to Self: Don’t ever have an affair. Putting a reminder of a secret rendezvous into my phone will show up on Rob’s calendar too.

Where was I again? Oh, my train of thought…I’m blaming whatever they used to put me under yesterday, even though I’m writing this before they do. That’s my excuse and I’m sticking to it.

Back to cameras: on Wednesday I witnessed a hummingbird hungrily visiting some flowers near my knees. I took a few pictures and although they are better than just a blur (those things move so danged fast) the shots could be so much better.

But here’s the thing: if I’m walking by a flowery bush and there’s a hummingbird in it, what are the chances I’m going to have my Sonyoltacanonikon with me at that moment to capture it? I’ll tell what they are: slim and none, and slim just left town. So here’s what I captured. 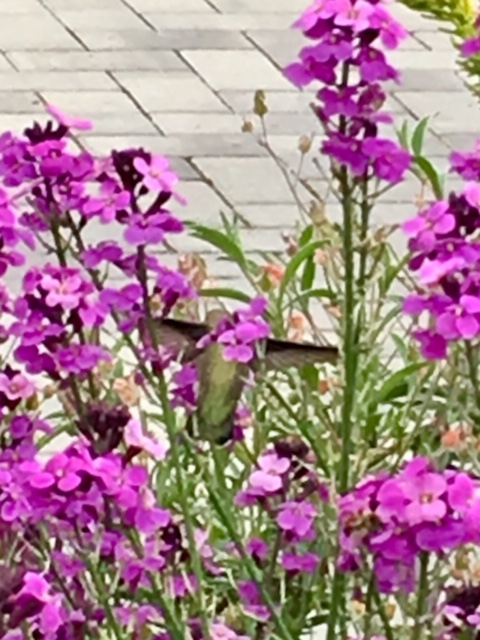 You have the idea that it’s there, but also have an urge to clean the lens or something. Not that good at all.

I don’t want the latest and greatest iPhone, but maybe I’ll have to bite the bullet one day and choose whichever Apple offers the best pictures. You deserve it! (That’s not what I’m saying to me, I’m saying it to you. I’m just that selfless. LOL) But I also want something that I can pop onto Insta or FB or Twitter or whatever, at a moment’s notice. What to do?

And I’ll leave you with a picture of something that happened right outside our window. I said “Whoa!” so loudly that Rob spun on his heel to see what was burning in the kitchen. But it was outside, in the sky across the Haro Strait as we look across towards Mount Baker in Washington State.

As though some artist swiped colours across a canvas with his or her fingers and left a smudge of brilliance. Rob took it on his iPhone – a later version than mine.

I hope you can see that colour – or you, um, get the picture. It’s way too easy to call it a metaphor or a sign, so I’ll just say that it was a patch of beauty on a day that had been soaked in rain.

May you enjoy moments of loveliness this weekend and I’ll be back with you on Monday. Thanks for visiting, as always.