Just a thought… Everyone thinks they have the best dog, and none of them are wrong. [W. R. Purche]

Is it just me, or does this week have a whiff of hope in the air? (Of course, there could have been something else that happened since I wrote this, but I’m taking a chance….)

Perhaps it’s the tenor of the news that’s changing – and that’s a good thing – or just a feeling shifting inside me. After all, isn’t that where so many of our perspectives come from: how we deal with what’s going on outside of us?

Instead of focusing on what we don’t have or aren’t doing (yet), we’ve gotten busy. We had a responsibly-spaced supper at a local diner that has just reopened. Delightful – even among the sheets of plastic hanging from various spots on the ceiling.

We saddled up and took our bikes out for two 10 km rides on the circuit known as the Flight Path: circling Victoria International Airport, it’s two lanes of walking and cycling splendour consisting of mostly gentle inclines/declines and upon which one can build up a good head of steam. I was smiling so broadly, I spit out two bugs!

We still wear our masks religiously when we’re in public (not on the bike path, although that might have helped with the insect intake), but on Friday we had to don them for the most anxious of reasons when Molly had an emergency medical situation and we rushed to the veterinarian.

What was already a week fraught with drama thanks to Dad’s fall – he’s recovering nicely but has run afoul of the laws at the residence (a story for another day) – was taken down even further on Friday.

I was just waking up and suddenly Molly began to cough violently. Before I could get to her to find out what was the matter, she toppled onto her side on Rob’s pillow and began to screech, letting loose an ungodly howl as she arched her back and went into a seizure.

As I ran to her side, I called for Rob and we did our best to calm her. She was soaked in pee and traumatized. Rob called the vet and all we could do was hold her until her appointment. 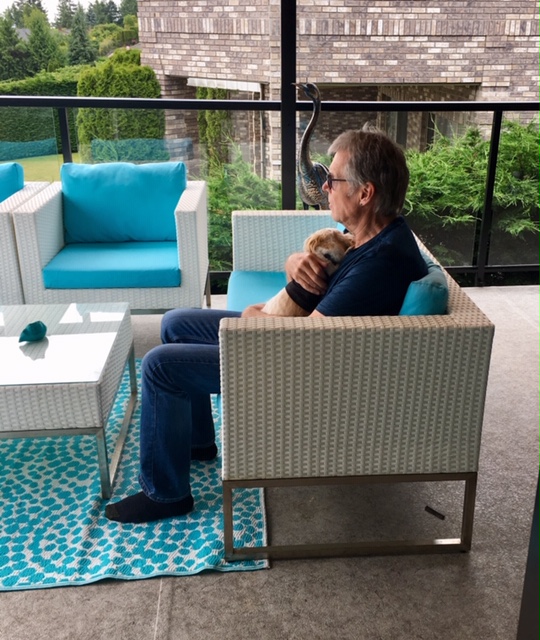 Hours of tests later, her vet determined that Molly’s health is gently deteriorating but that the seizure may have been brought on by her not having eaten the day before (low blood sugar). This is fairly typical: one day our fifteen-and-a-half-year-old behaves like a pup and we can barely keep up with her speed and appetite; the next, she just wants to lie around and hardly touches her food.

To make a long story – and day – short, she is now on medication to help her heart (she has a worsening murmur) and kidneys (which are slowly failing). She was prescribed no anti-seizure medication, but we’ll just try to make sure she eats healthily and often. After a sleepless night Friday on my part, not hers, she was as close to 100% as she was the day before her seizure. And so it goes.

Anyone with a pet knows that this is what we sign up for from the day we joyfully bring them home to join our family. Unless we’re providing shelter to a tortoise, we know that we will most likely outlive them. Of course, that does not make watching our beloved animals’ health fail any easier.

We cuddle them a little more closely and count every blessing. Giving her meds twice a day (and discovering creative ways to get her to swallow a capsule whole)? Not a problem. Not a sacrifice. She’s our little everything, our cuddle bug at night, our sweet girl all day long. And after a day when we thought we might be saying our last good-byes, we’re grateful for every moment we’ve had and will have until that day inevitably comes.

If we can keep that feeling alive as long as she is, I think we’ll have made the most of our years together. It’s all part of the contract: you just be you and we promise to pay you back as best we can for all of that unconditional love. That’s a pretty good deal on both sides, wouldn’t you say?

Have a lovely Monday. I’ll start tapering back the journals to twice a week again starting next week, if that’s all right with you, but for now, let’s meet again here tomorrow, shall we?