Just a thought… Whataboutism: a conversational tactic in which a person responds to an argument or attack by changing the subject to focus on someone else’s misconduct, implying that all criticism is invalid because no one is completely blameless. [dictionary.com]

So I’ll start today with a bit of background: I got berated on Instagram yesterday (and the day before by the same person) by a woman demanding to know why I had not posted about the unrest and demonstrations in the US – and our own Black Lives Matter movement here in Canada.

It took my breath away. I responded that I hadn’t focused my attention on Instagram – a platform I consider to be primarily for photographs – because I write a journal here. I frequently labour (Rob will tell you, for hours) to find the right words for what I’m feeling about the world around us, weighing what will resonate with what might offend and which words will stand up to scrutiny from people whose opinions I value.

Let’s be honest: I am nothing but a white, privileged woman in a country with more blessings than most of us can count. What I say about the struggles that people have suffered for hundreds of years can’t possibly make a difference, and I know that. All I can do is perhaps point out to other ridiculously privileged people how we might observe or consider things just a little differently.

That said, what I’m about to share with you is something to which I’ve given a lot of thought.

The other day on social media, someone posted a piece that pointed out the deaths of two white police officers and wrote, “What about them? All lives matter!”

I considered the comment, then chose not to respond to a thread that I wasn’t involved in. I don’t know how many minds are changed on Facebook, but this week especially, I just don’t have it in me to try.

I did find this photo yesterday, though, and I love the sentiment; I’m not sure where it was taken. When people say, “All lives matter,” I hope this is what they mean. 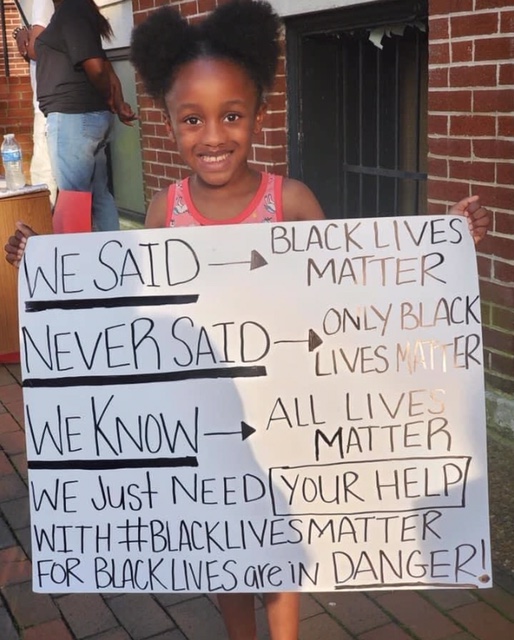 Every life is sacred. Every human being deserves to live in peace, surrounded by love, and afforded the respect that they have earned. All decent people deserve to go to their jobs, whether they put on a uniform, a hard hat or a stethoscope, and expect to come home to their family when that shift ends.

Since I’ve been posting videos on Fridays, I chose this one from a correspondent at an ABC news affiliate. Chris Thomas is a journalist and anchor at ABC 10 News in Sacramento, California. I’ll let him explain what he feels is the difference between “Black Lives Matter” and “All Lives Matter.” Because I respect his perspective and way with words a whole lot more than anything I could try to put together.

I’ll be back with you here on Monday.