Just a thought… Music is the moonlight in the gloomy night of life. [Jean Paul Friedrich Richter]

It never ceases to amaze me what power music can have.

I know that sounds simplistic – who hasn’t felt better or sadder when a certain song came on the radio – but at no time has that thought been brought home more often than during the past seven days.

Last Friday here, our local station CHEK put together what they called a “living room concert for Vancouver Island.” Remarkably well done in every way, the 90-minute fundraiser, which was hosted by the news team (which is what seems to be a tight, friendly family themselves) the show featured performances from the names you see below, and a few messages from sponsors, celebrities and political leaders. 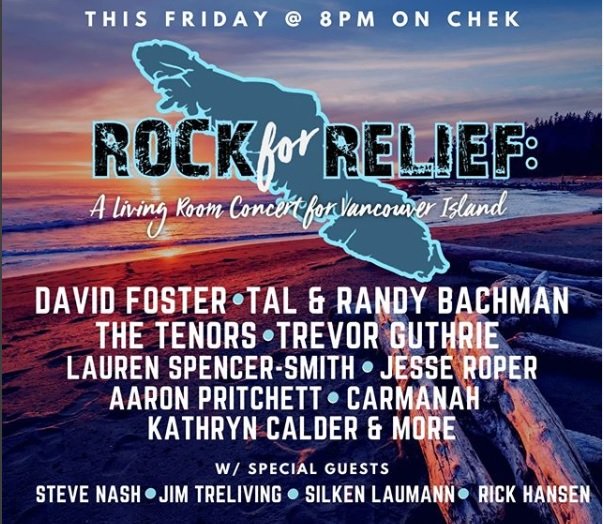 It was uplifting, entertaining and – although I hesitate to say it – more touching than the US show the following night for the WHO. We were mightily impressed by our local show; we turned it on thinking it would be a well-intentioned, hastily-assembled telethon (and not of Easter Seals-type quality), but we were flat out wrong. It was a great show and if you have the time, enjoy the show here.

I was struck by the incredible difference in yesterday’s Nova Scotia Remembers event. In theory, the two shows were similar: both were put together to share music and messages in a time of hardship.

But while Rock for Relief was a celebration of hope and inspiration, yesterday’s special nationwide broadcast which emanated from Nova Scotia was a virtual vigil to offer healing and solace in the wake of last weekend’s horrific murders in the province we’ve always known as Canada’s Ocean Playground.

There was one very similar, underlying theme though: gratitude. Here on our island, almost as far as one part of Canada gets from Nova Scotia, the plea last week was for generosity during these hard times for so many. There was also a loud message of gratitude to those who have given so much so that we can be safe and healthy during a pandemic.

But in the vigil yesterday we also saw gratitude: for the lives that each of these souls lived. For the sacrifice made by RCMP Constable Stevenson. For the comfort that Canadians and others around the world are sending at this time of unimaginable pain.

Through it all, the thread that wove each of these special presentations together was the healing power of music. Whether simply picking an acoustic guitar, playing the bagpipes on a sullen shore or singing while sitting at a piano, every person who contributed touched our hearts with their own gifts.

No one who saw – or sees this now – will forget this performance, though. Troy, Nova Scotia’s own Natalie MacMaster – long recognized as a Canadian and international fiddling treasure – played along with Emily Tuck, one of the victims of last week’s madness. You can watch it here.

The original recording of the 17 year-old, whose parents were also murdered, was made during what was called their “COVID Kitchen Party” in Portapique. So recent – and yet literally a lifetime ago. And though Emily now is gone, I hope that her extended family and fellow Nova Scotians find the same comfort in listening to her music that we have felt in the five years of hearing, over and over, our daughter’s sharing of her own gifts.

That is the power of music.