Just a thought… As sure as time, history is repeating itself and as sure as man is man, history is the last place he’ll look for his lessons. [Harper Lee]

I can’t even believe it’s only been a month today since we nervously caught our flight home to Canada from California. So much has…not changed. But tempers are simmering, with fuel being added to the fire by people who are absolutely ignorant to, and uncaring about, what opening everything again could cause in the not-so-long run.

If you’re like me, you’re watching with incredulity, loathing and, yes, some fear the people who are losing their nut about having to stay inside. The ones being egged on by their “leader” through and with the help of his main platform, the propaganda TV network that is champing at the bit to get everyone back out on the streets, onto transit and into crowded workplaces, before the virus has even peaked, in many places.

Of course, I’m referring to this round of the virus; the bigger world picture demonstrates that there will be another wave of it, if COVID-19 isn’t given a chance to die off, which is what SARS did in the early 2000s.

Do we all want to stay in? Of course not! There are millions of people in this country and everywhere else who are desperately worried every day and night about how to pay their bills and feed their families. Our government’s efforts to help mitigate some of the financial pain is helping, but it can’t bring back businesses that will shut down, never to reopen.

There have already been lasting effects and we will see more for years to come. But don’t we owe it to others and ourselves to try to get life back to some semblance of normalcy by following the guidelines (and in some case orders) of those who have actual medical degrees and insight into how this new virus works?

The “just like the flu” and “I have my rights!” crowds seem unable or unwilling to understand that a virus that strikes your respiratory system as drastically as this one can has the capability of leaving you with lifelong lung problems.

This includes children and young people, so often pointed to as being more likely to be immune to or recover more easily from this disease. The detrimental after-effects could prove permanent. No, this is not the flu. Or car accidents. Or any other ridiculous false equivalency that we’ve been hearing from people with no more medical knowledge than I have.

But, you know, just like the folks who had to go to the beach on the long weekend in JAWS, they chose to ignore actual facts. Just as they have when it comes to climate change and anything else they don’t want to acknowledge or can barely understand.

They refuse to listen to history, as in the case of the Spanish Flu (which began in Kansas in the US, for what it’s worth) in 1918 – not 1917 as tRump keeps saying. When WWI ended, it was decided by some that, despite the deadly flu, people needed morale boosted in the form of big celebrations and parades. And guess what?

Those gregarious gatherings brought about an entire new round of devastation and death. There were three deadly waves of the Spanish Flu, which cost more lives than the Great War itself. More reading here.

My heart goes out to the health care workers who are going to put their own lives on the line to treat those patients who don’t take seriously the science that they’ll call upon to save their sorry souls.

I just wish they could sign one of these before they go to the beach, to the rallies and every other gathering. 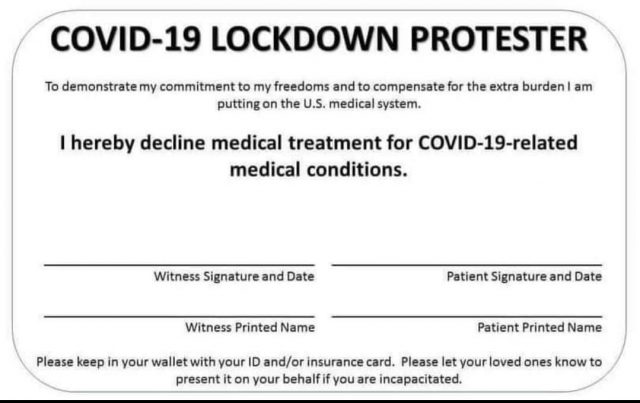 We are seeing humanity at its absolute worst in our next-door neighbour and, if my Twitter feed yesterday is any indication, right here in Canada, too, where it appears that hatred for the prime minister or his party often supersedes any intelligent thought.

We can do our part and hope that those who choose not to, who would rather Live Free and Die, to mangle an American slogan, will stay home. Thankfully, a closed Canadian border will help keep out some of the stupidity.

Now let’s spread the message to the ones here who aren’t getting it – before they really get it, and keep this virus going on and on and on.

Because that’s how these work: you can’t pray it away, you can’t protest it until it skulks back to where it came from, you can’t get sick to “own the libs” (get back at the people you hate) or to show “Turdeau” (as the haters like to call him) who’s boss.

We fight together, we stay at home. We wait this out like the responsible adults we’re supposed to be and we listen to the advice of experts.

We can do this.