Just a thought… One of the hardest things in life is letting go of what you thought was real. [attributed to numerous sources]

An update on Miss Molly: turns out, like most of us, she was just bored. I can’t blame her; she’s on a diet for her kidneys and she’s tired of the food. So we shook things up with a bit of egg and some rice, and she devoured it. So on we go…with a question.

What is the mask rule, anyway? (Don’t answer; it’s rhetorical.)

Before Rob went to the grocery store on Sunday, we scoured the house and garage for anything that even resembled a mask and came up empty. Instead, I gave him a linen scarf (a nice dark one, not flowery or anything) and asked him to be sure to wear it, up under his glasses and over his ears covering his cheeks and chin. He promised he would.

Why? Because when he got into the grocery store, no one was wearing a mask or a scarf. Not a shopper, not a staffer, no one. So he felt really stupid, like he was “overreacting” by putting on a scarf and looking like a bandit.

I can’t blame him; avoiding being embarrassed is a strong motivator for me. And I can hear you yelling, “Getting a deadly virus is worse than being embarrassed!” so, yeah. You’re right. It’s a ridiculous response to a surreal situation and I don’t know why we’re so armed when we leave the house and then when we look around we go, “Huh. Maybe we’re over reacting….”

Well, it is that bad. And lackadaisical attitudes like that will get us – or others – sick. So, as of today: masks. No exceptions. We’re just going to wear them.

There’s this bizarre disconnect between what we read and know, and what we do. Call it cognitive dissonance if you like: the reason we do things even though we know they’re bad for us. (I’m kind of a queen of that.) However, we got this message from the neighborhood (yes, without a “u” in this case) association in Palm Springs. 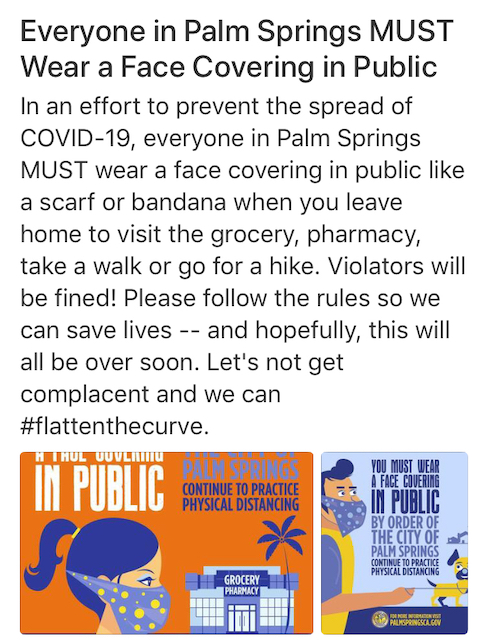 That’s how serious California is; every place seems to have different rules, but trust Palm Springs to make their posters super artsy!

Speaking of masks, here’s something you’ll want to see. I happened to catch this on the Late Show with Stephen Colbert this week, and I wanted to share it with you. The lovely Matthew McConaughey shot a video to illustrate how to make a simple DIY mask. And although we don’t have bandanas, we do have any number of pieces of material left over from Rob’s sewing projects. So yes, we’re making masks.

Stay safe, stay sane and watch this video. It’s cool and helpful. And you’re going to want to share it with your loved ones…but tomorrow I’ll have pics of the ones Rob has made, plus some solid tips from a nurse pal of mine whose job it has been to supervise mask making and wearing, on what we need to do to make this more efficient. Talk to you then.