Just a thought… When you learn, teach. When you get, give. [Maya Angelou]

Welcome to a Thursday that feels strangely like a Saturday or Sunday (a sensation of blursday that we’ve all come to experience in 2020) because we were treated to a bonus sleep-over with Colin this week.

He was off school yesterday for Remembrance Day, but proudly brought to our house a booklet he’d coloured and written in at school: a poem about the poppy. While it was a good first step towards learning the significance of November 11th, he didn’t really have any idea why he was off school for the day. At age six, I suppose I didn’t have a clue either about the day.

I remember being taken to the cenotaph in Ottawa, my Dad proudly in uniform, as we took in the ceremonies on more than one chilly November 11th. But really, did I understand even a little bit, what it meant?

Yesterday we watched out our window as a series of five Canadian Navy ships passed by, far below us on the Haro Strait. (Pardon the picture, it’s the best I could do.) Colin examined the boats through binoculars and then his attention was drawn to five warplanes as they lumbered through the grey skies over Sidney, BC. 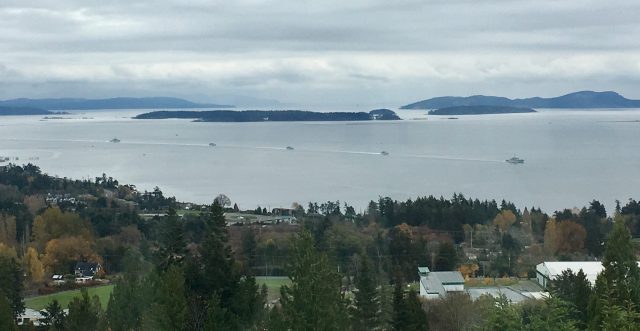 The air and water displays happened to come just after we had watched two videos on YouTube about poppies and Remembrance Day, told from a standpoint to which a child might relate. He’s only just now comprehending the concept of death, a message that came through clearly the other day as he heard on the radio of Alex Trebek’s passing. Alex is, I think, the first celebrity (not of a Muppet genre) that Colin ever knew; as a toddler he loved to watch Jeopardy!.

He is learning what it means when someone dies: to not come back. And so, knowing he has that slightest bit of understanding, we related to him the plastic soldiers from Toy Story (Sarge being the one whose name we know) and the fact that yesterday we remembered real soldiers: people who knew that very bad men were trying to tell the grown-ups and children in Europe (where another favourite, Peppa Pig, comes from) what to do and were very, very mean.

So the good people of Canada – people his daddy’s age and younger even – went over to stand up to the bullies and to help our country’s friends. Many of them got hurt very badly; some died and didn’t come home to their children and their mommies and daddies.

And that’s why we remember them on November 11th: because we are so grateful. (Yes, there are a great many historical facts that are muddy or missing here, but work with me here.)

He stood quietly at our side while we watched part of the 11 am ceremonies on our local station. He listened as Rob and I sang “O Canada” along with the people in Victoria on the TV. We told him that through his parents, his school and us, he’ll understand what this day means when he’s a little older.

The task of trying to boil down the vastness of something like a world war, the incredible sacrifices and costs that were made and exacted, into a concept that a young child can understand is seemingly impossible.

How do you even begin to paint a picture that only truly became clear for me as an adult after visiting Vimy, France and nearby towns whose farmers had collected shells (some spent, some not) and placed them in a modest museum; where it took an elevator to get down to the place that soldiers survived in crowded, quiet, darkness, waiting to spring an Easter Sunday attack on the enemy. The memories of what I saw have stayed with me and I was merely a tourist!

How blessed we are, so many of us, to have no personal recollection of the horrors of war. At one time, nearly every Canadian knew a family that had lost someone in one of the conflicts where our young men, and later women, were called to fight. Today, merely being asked to wear a fabric mask is considered by some to be an affront to their freedom. One wonders what those souls who wore gas masks for weeks on end would think.

They might likely say how damned lucky we are to live in a time of such widespread peace. It is a gift to which we feel so entitled now – that explaining it is almost as hard as imagining life without it.

Have a peaceful weekend and I’ll be back with another journal on Monday.