Just a thought… When disaster strikes, the time to prepare has passed. [Steven Cyros]

It was the talk of the hockey rink this week: the story of the senior men’s hockey league in Newmarket, Ontario that was struck by Covid, causing the death of an otherwise-healthy 75-year-old Garry Weston. I read the descriptions of this much-loved and appreciated man and my heart goes out to his family, community and his teammates.

I could also relate to the words being said about him; but for the age difference, they could have been writing about my Rob. Also double-vaxxed, he plays with different men’s and mixed leagues. Breakthrough Covid is something we try hard not to think about as we go on with our lives – carefully, of course – but it shook his fellow players down to their skate guards.

Something else happened in Rob’s hockey community a few weeks back that could easily have also ended in an obituary. But thanks to this brush, some changes have been made, all for the better. 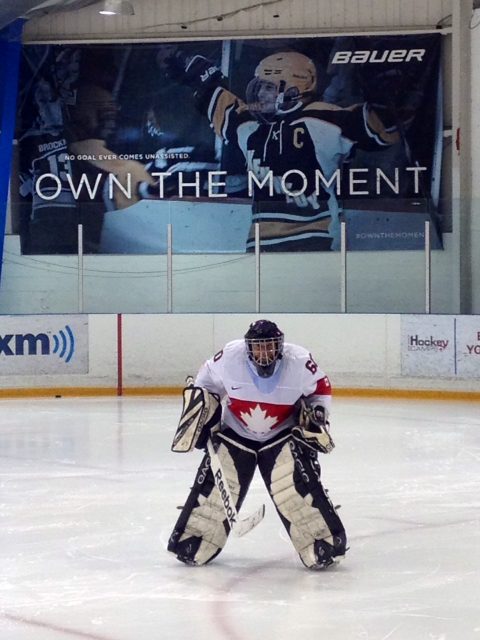 Rob plays now four mornings a week (he was offered a fifth and may take it when our work schedules settle a bit). Thank goodness that in these leagues – and many others – goalies, who are much in demand, play for free, or we’d be selling something. Like, I don’t know, GOALIE EQUIPMENT? (Kidding, Rob. Sort of….)

So Rob’s in his net and notices a commotion on the bench. What was it? A man, who’s 61, was sitting chatting with a fellow player when he stopped talking mid-sentence and just slumped over. I don’t know what kind of horseshoes this man, who was joining them for the first time, had tucked in his pads, but the guy he was talking to is a doctor. Of sports medicine. Wow. (The only way he could have been luckier is if his fellow player was a cardiologist – and there’s probably one of them that plays too!)

This doctor knew what to do, and fortunately, so did the staff at Panorama Rec Centre, just down the hill from us here in North Saanich. There are four defibrillators at the rink, and one of them was put to use to bring this man back to life, after manual efforts were proving fruitless. His heart had stopped. Yeah, it was that serious.

In ten to fifteen minutes, the ambulance took the player to the hospital where he was operated on and is recovering with a new stent in his heart. And it looks like he’s going to be okay.

We’re not sure how they contacted his wife, but they found his cell phone and found her, hopefully in his ICE contacts. In this case, that doesn’t mean ice of the skating variety; it was actually In Case of Emergency.

The fact she was able to tell those caring for him about his family medical history and such helped them to get him what he needed which, in this case, was breathing again.

But it raised a few concerns and some excellent recommendations. Because of this man’s emergency, players recognized that they didn’t have contacts for their spouses or people to call if something happened. And stuff does happen: with their median age around 65, things can go wrong in the health of the men and women who play with Rob. Now fellow players know whom to call and notify; I mean, no one would have known to call me, had that been Rob needing life-saving measures.

Oh, and a side note: Colin was off school that day and we were thinking of going to watch Grandude play. Fortunately we did not, for had we pulled up and seen those emergency vehicles, I think I would have needed a defibrillator.

So here’s the point: if they’re out and about, please make sure your loved one has your name and contact information readily available. Be able to reached, just in case. I mean, none of us thinks this is ever going to happen, but it just does. And no one wants the line “He died doing what he loved” in their obit. No thanks. Let’s all go into overtime, shall we?

Thanks for coming by and we’ll be back with you on Monday.