And how are YOU today? If you’re like me (as of this writing) you’re watching, waiting and wondering. I followed the vote results – such as they were – on Tuesday night with the TV muted, while busily editing a voice job on my computer that’s going to take weeks. Looks like I may be done with that before we know who actually won the US presidency.

Already, the clementine criminal has sown the seeds of a stolen election and stirred up the anger of his easily-triggered cult. But did anyone think any part of this was going to be civil?

So, on to happier things like, oh, I don’t know – a table saw injury?

Seriously, though, Rob is really grateful for your good wishes. He’ll be seeing the doctor again next week and, with his ring and middle fingers likely to be taped together, he’s hoping to be back in his goalie gear in two weeks or less. I’m not even kidding when I tell you that he called the goalie coordinator to tell him about his accident before phoning me on Sunday. I mean, I understand (he had to take care of getting someone to cover for him the next day in net) but it’s funny just the same. At least I know where I stand!

We’re laughing plenty (when we’re not sopping up accidents) with our sweet little girl. Hey, those pee pads they sell to train dogs, they’re just to show puppies where not to go, right? They sure are in our girl’s case. I think if I covered the living room floor with them, I’m pretty sure she’d never pee there again. Perhaps I’m on to something….

A few folks on Facebook who don’t read this journal have asked what kind of dog she is. She’s a cross between a Shih Tzu and a Pomeranian – with more of her daddy’s Shih Tzu than Pom. Some call the blend a Shiranian, others a Shih Pom. I didn’t care what breed she was; I just knew that as soon as my sister found her, I wanted to make her mine.

So, what’s her name?

First, let me tell you what we almost named her: Flower. And I know that sounds bizarre, but there are a few reasons it fit, including the skunk from Bambi and the fact that it was one of our nicknames for Lauren (also because of that sweet, bashful and funny skunk). I didn’t want to have to explain the skunk thing every time I met someone on the dog walk, but more importantly, I just couldn’t see myself saying the pup’s new name without feeling twinges of hurt at the same time, and that is so NOT what this dog is about. So long, Flower.

I considered Millie, as she’s silly, and it’s similar to Molly. But I lost out on that one, too.

For a while I was calling her Tunie, short for Petunia, but I got voted down on that. She does look like a Tunie to me, whatever that might be, but no. And so we settled for a name that still has a strong family connection: it’s the name of a character Lauren played in a high school musical, and the angel with whom she would have tea when she meditated. And it’s also the name that Colin told his mom he hoped we’d be choosing.

What’s this little girl’s name then? I’ll let you watch the video to find out. Click the photo below to enjoy this, and I’ll be back with you on Monday. 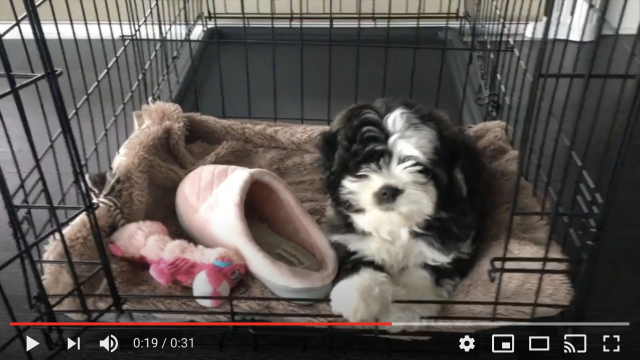