Just a thought… You spend your entire life in your bed or in your shoes. So they’d both better be comfortable. [Author Unknown…but hear, hear, whoever she was!]

Thanks for coming by! I hope you had a great weekend, and our thoughts, of course, were with those marking Orthodox Easter yesterday, especially those in and displaced from war-torn Ukraine. Our hearts are with them.

To MUCH less important things…. It was a gentle and fulfilling weekend here and I’ll tell you more about it on Thursday – gotta pace myself – but it occurs to me that there was a bit of a cliff hanger (were you dangling by a shoelace?) after last Thursday’s journal. Right after gentle facials at the hotel spa, I limped to Winners and grabbed a $40 pair of Nauticas. They’re so bright that the added bonus was if the ferry went down later that day, they’d be sure to spot me from my shoes. Nice thought. 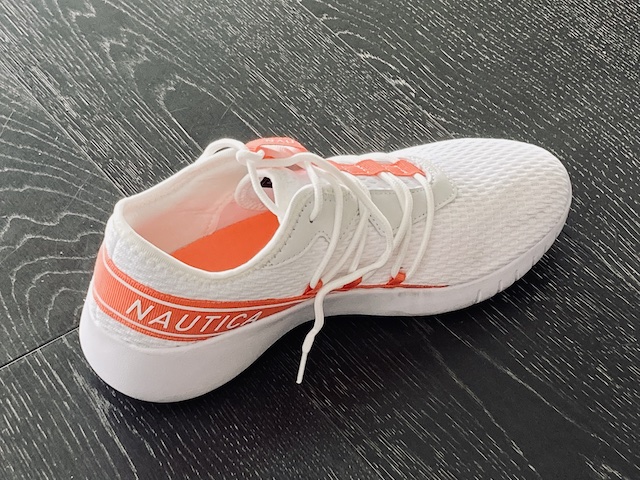 Also some curious folks on Facebook asked how the ferry travel works, and I thought, well, why not do a deeper dive (so to speak) and fill you in a bit on island life?

It took some adjustment for two people who were living in a city, literally on a subway line (our last condo was on Bloor in Toronto), to settle in a place where you really have to map out where you’re going and give yourself a lot of extra time. For example, the Malahat Highway is the main way for us to get up and down Vancouver island; summer construction, a snowstorm or a rollover can cause hours of delay with nothing to do but sit.

Here’s how our crossing to the mainland worked, though: to go to Vancouver for a 4 pm get-together, Susan and I got to the ferry at around 11:40 am. We purchased our “foot passenger” tickets from a dispenser, then traversed a very comfortable walkway to board the ferry. We had several choices for the 90-minute sail to Vancouver: you can sit in train-style seats that are placed in well-spaced rows, or go to the restaurant and grab some lunch (which we did). There are quiet spaces and a children’s arcade (neither of which was open at the time we rode), and a beautifully-stocked store, which is where I bought not one but two rain-proof coats during an earlier crossing. Great stuff.

When you disembark in Vancouver, you go straight to your ride, or in our case, a machine in the terminal that dispenses tickets. We bought a three-zone one to get us downtown, boarded a bus and then got off after the second stop to catch the train which can go downtown or to the airport. It was all pretty seamless and cost about $35 from home to our hotel. Not bad at all, considering Air Canada wants $299 one way, although you can take a float plane from Victoria to Vancouver Harbour for just about $170 with one bag included. So you see, it takes longer, but is super economical and when you’ve got a friend with you, the time simply flies.

It’s a great plan if you’re mobile, don’t have a lot of luggage and have a bit of flexibility. Oh, and Rob, being so much older than I, actually gets to travel for free on Tuesdays through Thursdays. How do you beat that?

Living on an island has other challenges: everything is more expensive because it has to get here by air or ferry, so there’s that. The housing is astronomical, as it is everywhere, but even more so here in paradise. Even further up island, prices have increased by percentages in the near triple digits.

The only real hardship (for us anyway) is when we take a trip, as we are in one month: finally getting to host that riverboat cruise along the Rhine with AMA Waterways! We get all the way back from Switzerland and then have to sit for four hours (I’d say “interminable” but it’s actually in a terminal so does that cancel the word out?) to wait for a 10-minute flight home to Victoria. We can almost see our house from there. But no…we have to wait. And with cancellations and changes being the only constant over the past several months, we’ll be lucky if THAT flight even goes.

I’m not complaining – it is what it is. I will be whining out of exhaustion once we get through customs in Vancouver, as we will only want to climb into our bed.

But considering how long we’ve been waiting, I guess four hours more won’t kill us. And yes, we’ll be masking every step of the trip.

Have a gentle week – I’ll be back with you Thursday and don’t forget that tomorrow, Tuesday, is Snooze Day – we drop another fairy tale for you on Drift: one I call Defying Gravity. Talk with you then!