Just a thought… Absence is to love what wind is to fire; it extinguishes the small, it inflames the great. [Roger de Bussy-Rabutin]

Welcome to Monday! I’m in a bit of an elated state, having spent the weekend in the company of our sweet little grand dude, Colin.

We celebrated his Oct. 11th fifth birthday early, going to an indoor play place called Fun Haven, visiting Build-a-Bear (where we watched him decide on the scent, sound and outfit for his newest friend, a bigger version of Paw Patrol‘s Chase).

Endless storybooks and cuddles, two trips to our favourite park to ride the bike that his Grandpa Kevin gifted him, and lots of other little adventures made the weekend simply unforgettable and one filled with firsts.

It’s hard to pick highlights, but there were two: Colin stayed with us for a night in our hotel room, and yesterday afternoon we saw a movie that brought us to a full circle moment in our lives.

I wrote about Toy Story 4 when it came out this summer: we wouldn’t be seeing it. The first three installments in this classic Pixar series were so interwoven with our little family that Rob and I didn’t see how our hearts could bear to watch a fourth movie without the girl who’d grown into a woman and cried with us in the theatre as we watched Andy Davis grow up and head off to college, just as she was doing the exact same thing.

When Colin said he wanted to dress as the cowboy Woody from Toy Story for Halloween, we were delighted at the coincidence. Then, against all odds, we found a small theatre in Ottawa that was showing the film (to be released tomorrow for DVD and download, if you’re interested).

The opportunity to take our little guy to a theatre for the first time for such a significant movie for Rob and me was irresistible. And so, on a rainy Sunday, off we went, hearts in our throats, to see if we could get an almost-five-year-old to sit still for over 90 minutes in a theatre. (Notice the poster to the right in this picture? I couldn’t resist including it….) 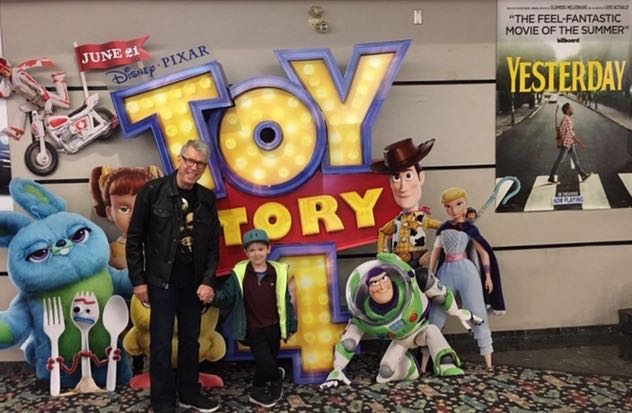 We had nothing to worry about. We gave Colin a comprehensive briefing over breakfast about whispering to us if he had questions, keeping his feet still, being sure to pee before the movie and promising to stay for the whole thing.

He enjoyed the story, jumped only once when something surprising happened on screen, and seemed to enjoy Grandad Banana’s laughing at so many of the film’s witty lines. We stayed not only through the wonderful end credits, but as we walked to the back of the empty theatre to let staff sweep up, he watched the screen as the hundreds of names scrolled up.

(We’re a big fan of credits and were glad we stayed when everyone else had left: there was one last gag over the PiXAR name at the end featuring the lovable Canadian motorcycle stunt rider, Duke Caboom.)

It was as the last strains of the score faded that my tears began, a now-uncharacteristic release of emotions that had built up since we first began screwing up our courage to see just one more Toy Story movie. Who would have imagined it would be with our daughter’s son? And he was just so perfect.

After the film, as we tried to glean insight into his take on the whole movie experience, we asked what was his favourite part. His answer? “Woody and Buzz Lightyear.” Later, when he told his parents about the movie, the extent of his critique was, “I had popcorn!”

There were, as I say, almost too many moments crammed into our 31 hours of “just us” time to list the ones that shone most brightly. But through every single one, I kept reminding myself to imprint a picture in my heart so that I could try to hold on to it for the months we’re apart.

Luckily, we’re back in Ottawa during the final week of this month when another business trip brings us east, so the good-byes weren’t too hard this time. We’re counting ourselves lucky, as we so often try to do.

Later this week, I’m going to share with you our thoughts on sweet Baby Jane (with a gorgeous picture) and Colin’s reaction to his new sister. I know our daughter was very vocal about not wanting a sibling; would Colin feel the same? Once again, we needn’t have worried.

Today, I’ll be on CTV Ottawa to talk about Mourning Has Broken at about 8:40 am. I look forward to sharing the reaction to the book, so much of which I was blessed to experience last Thursday in London.

The day began with a new keynote address that I’ll also be giving this Thursday in Collingwood – one that was received with a standing ovation, laughter and tears – truly all I could hope for. That evening I was in the company of my friend Lisa Brandt as she interviewed me at a book signing at Chapters. 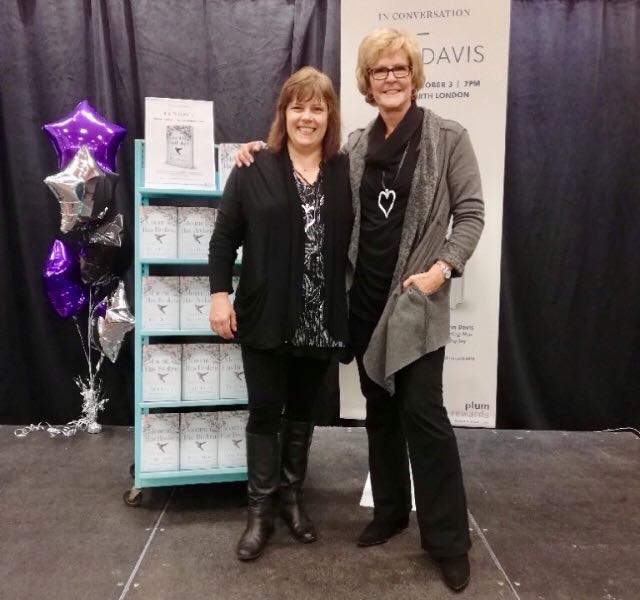 Today we head to Ennismore and the embrace of our dear friend (and now, fellow traveler) Mike Cooper. This trip is doing a year’s worth of good for my heart and both Rob and I are enjoying it all. (The backdrop of autumn colours sure doesn’t hurt, either!)

For now…happy trails. I’ll be back with you Thursday. 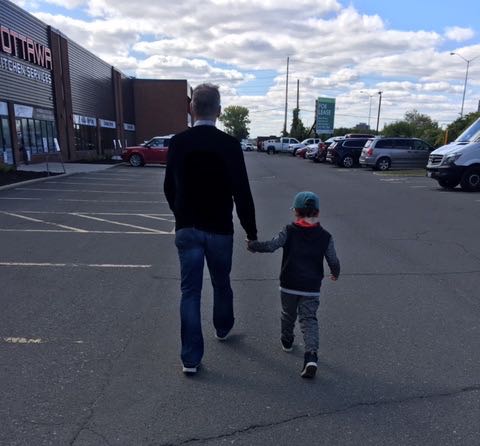