Just a thought… May the forces of evil become confused on the way to your house. [George Carlin] (and yes, I checked to make sure this really is one of his pearls of wisdom, unlike so many that make the rounds!)

My own “knives” were “out” when I got a suspicious phone call the other day and I’ll tell you about it in a moment. But first to the movies: if you’re looking for an update on the old reliable “whodunit” genre of film, complete with twists, turns, eye-popping scenery like, oh, Daniel Craig as the lead investigator, and a great cast, I recommend Knives Out. 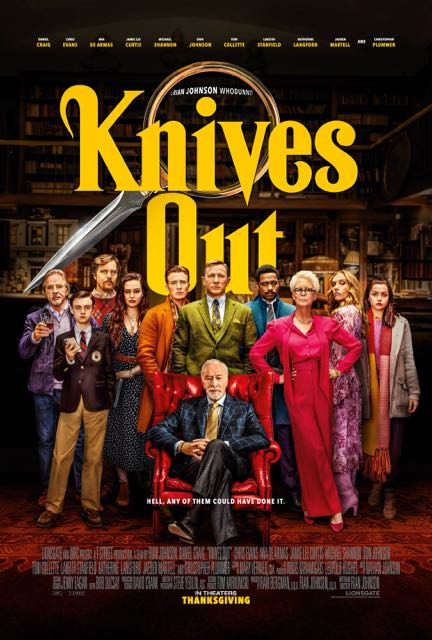 In a nutshell, Christopher Plummer’s character, a hugely successful author, is found dead in his study in what appears to have been a suicide – or was it? Only one person knows for sure, or do they?

It is, as one writer smarter than I put it, “Agatha Christie for the Trump Age” and don’t take that in a bad way. The one-percenters are at each other’s jugulars for almost the entire time; who will get the estate?

It’s billed as a comedy, but the laughs are more wry than of the belly variety. Good adult fun with Star Wars: The Last Jedi director Rian Johnson at the helm, and Golden Globe noms to boot! (We won’t miss them January 5th, hosted for the 5th time by the wonderfully irreverent Ricky Gervais.)

Now, to the phone scam I mentioned here Monday. I’m sitting writing when I see a call coming in and it’s a number from Guelph.

In the split second it took me to think it over, I couldn’t rule out knowing this person, so I decided to answer. After a lengthy pause, there was a garbled message from “Service Canada” saying that my Social Insurance Number was being suspended for some reason. Okay, I thought, I’ll bite.

As the message implored, I hit the #1 on my keypad. After one short ring, someone in a busy call office filled with voices and noise in the background answered, “Service Canada….”

I said, “Hello, what is Service Canada?” After a moment, he asked me to repeat myself, so I did.

Then he responded haltingly, “You don’t know what Service Canada is?”

I answered, “No, and neither do you – you’re not even IN Canada, you lying a**hole!”

Well, that did it: he responded with a flurry of expletives that started with an “F-you!” and he got to “Mother Fu…” – before I hung up.

That felt good for about ten seconds. And then I thought, Uh oh – what if that really was Service Canada and that man had a thick accent because he’s new to this country? Did he swear at me for coming off as racist? Did I actually attack someone who is working for the Canadian Government?

Before I got into too much of a cold sweat, I looked up the phone number: 226-500-4649. There was nothing on the internet to suggest that it was suspicious. Oh jeez. What had I done?

I called the number and – surprise, surprise – a recording told me that it was not in service. So that answered that for me: my suspicions were correct.

Next time (although Rob urges me not to get into it with these people out of fear of harassment – even though I block the number immediately) I am going to put on my most desperate “little old lady” voice and plead out of fear for them to help me and not to suspend my number – or whatever it is these nefarious boneheads are threatening to do.

If I’m lucky, Rob’s phone will be nearby and I can record the entire exchange. And I promise to share it with you, but you may not like some of my language, as you can probably already tell!

And now, if I can have a little privacy, I shall remove my fightin’ pants. They do feel good, though…almost as good as my jammies. Have a great weekend and I’ll be back with you on Monday.