Just a thought… Memories warm you up from the inside. [Haruki Murakami]

Ah, Halloween: it brings us so many great recollections, but I remember most clearly (perhaps with a shudder) the year we almost didn’t have one!

We were living in England on a military base and the holiday just wasn’t a thing there; we heard we would have to wait a few days for fireworks on Guy Fawkes Day, which sounded intriguing in its way, but was missing one very important five-letter word: CANDY. (Or sweets, as they were called there.)

So, what did we long-faced Canucks and Yanks do? Thankfully, parents came to the rescue: Canadian and American kids gathered for a daytime party at the local officers’ mess, where we had candy, games and fun. So often it’s the years things kind of went sideways that stand out.

I remember walking Lauren through the leafy, rain-soaked streets of Leaside as she excitedly gathered her bounty, all the while mumbling under my breath at the news/weather guy who had sworn up and down that it wasn’t going to rain! No sirree!

(Part of my chagrin was because, of course, we’d taken his word for it – he was also our weather guy – and promised parents the same and knew they were likely muttering our names under their breath, too.)

Here in Southern Ontario on the cusp of October and November, weather always seems to play a role in Halloween memories. No matter what creative costume idea we conjured up, it was going to have the words “in a parka” added to the description.

One year I decorated a box and cut head and arm holes. What did it end up being? A Die “in a parka.” (That was the year I borrowed one of my mom’s “good” pillow cases and, because it got wet in the rain, it ended up with a big black and blue stain from a jawbreaker.)

Another year when we were posted in Ottawa, I really leaned into the weather: I donned an actual Inuit parka and handmade mukluks dad had brought home from his time in the Arctic and was the warmest kid on Heron Road. 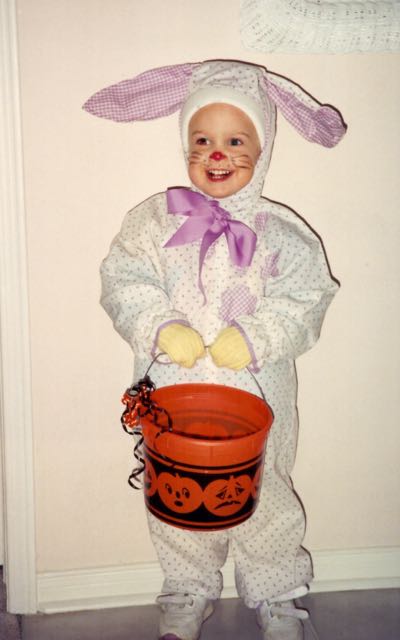 Continuing the tradition, Lauren dressed up as a bunny “in a parka,” a kitty cat “in a parka”…well, you get it. Anyone care for Mary Poppins (umbrella and all) “in a parka” tonight? ‘Cause it looks as though, where we are, we’re going to need it.

Oh, who really cares? Sure it’s great to see creativity at your doorstep, but for a child, what it all comes down to in the end is the haul.

Tonight we’ll trot along behind, trying to keep up with Toy Story‘s Woody (Colin), his baby sister and mom and dad, who will all be in costume too. Despite a heavy rainfall warning promising 30 to 50 mm of the wet (but thankfully not white) stuff between yesterday and tomorrow, we’re all taking our favourite little guy out trick-or-treating in an Ottawa suburb and Rob and I have promised to stay out longer with him if his parents and four-week-old sister decide to call it quits after a block or two.

As Rob put it, did any kid ever look out the window and say, “Nope – too wet to go out and get free candy.” Um…probably not. Rain, sleet or snow, why wouldn’t we go?

How often are we going to be given an opportunity like this? A child’s years are fast and fleeting; the chances of us timing a visit to coincide with this big night again are fairly slim. So we’re jumping on this like a kid on a full-sized candy bar. Whoo hoo!

We’ll be here in the National Capital area just having fun with this little family for the next few days, and then this Sunday spending a few hours talking with a small group gathering at Bereaved Families of Ontario in Oshawa.

For a bigger event, Tuesday night we’re welcoming you to come hear my ED Talk (as in Erin Davis LOL) called “Reclaiming Joy.” Details for that are here, and it’s for a wonderful cause.

I’ll remind you Monday, if that’s all right – and in the meantime, you have a terrific Halloween. I hope there are memories made or recalled…and that the first weekend of November is indeed a gentle one. Got your poppy yet?